The Futurity plastic reed was one of two plastic reeds designed and patented by Mario Maccaferri and produced by French American Reeds. Futurity was the “popular” priced or value version of the plastic reed.

Futurity: How is it made?

The Futurity plastic reeds were injection molded.  The mold produced 4 reeds for 3 different instruments.  One clarinet, one alto sax and two tenor reeds.

In the image below you can see the round sprue in the center where the hot plastic is injected into the mold and travels out through the runners then to the gate and finally into each reed.  The newly molded reeds are then removed from the sprue. 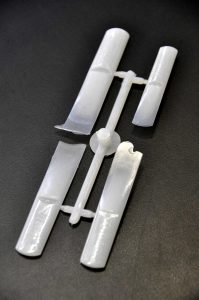 Note: We’ve used an “ugly” example in the photo to illustrate that the reeds don’t come out of the mold playable and perfect.  The clarinet is pretty close but you can see that the tenor and alto reeds have a lot of excess plastic to be trimmed.   One of the tenor reeds cooled a bit differently and started to curl.  Without getting too deep into thermodynamics, the flat bottom of the Futurity reed will cool at a different rate than the curved top of the reed and can cause it to curl. That excess with be trimmed later in the finishing process.  All of this to illustrate some of the challenges that still exist today.  Keep in mind that the plastic injection molding technology had just debuted at the 1938 World’s Fair.

As you can see in the image above the tip of the reed that vibrates when played is longer than it should be and will be clipped.

Futurity Reeds were available in 5 strengths.

One general reed was molded then trimmed down to the desired strength.  A #3 hard reed would have the most material removed and the softer reeds would leave more material to vibrate easier.  Similar to how traditional cane reeds are trimmed.

There was a line on the trimmer(not pictured) that was used to determine how much material to remove.  It a useful part of the process.  depending on demand for strength you could cut to order and meet demand.

The next step was to add the small paper label to the indentation then apply a blue dye/wash to bring out the molded lettering. 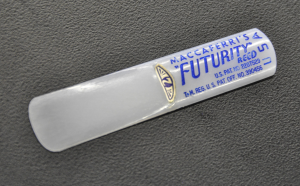 If all of that sounds like a lot of labor on top of a plastic molded part you would be correct.  However, keep in mind that this was space age technology before the space age and twenty-five years before the infamous Plastics quote in “The Graduate”.  Plastic Injection molding was cutting edge at the time and labor was less expensive.  One Alto Sax Futurity Plastic Reed cost $1.00 in 1943.  That would be roughly $15-$20 in today’s dollars.

Also consider that at the time the French American Reeds factory was located off 7th avenue in Mid-Town Manhattan (1658 Broadway).  Plastic molding machines were hoisted by crane and passed through the window of the building.

Front of the Insert quote:

This reed embodies all the improvements that science, skill, and ingenuity provide today.

“FUTURITY” has brilliancy, power, pitch, and other superlative features, which combined, make the perfect reed.

“FUTURITY” Reed is your Best Buy. 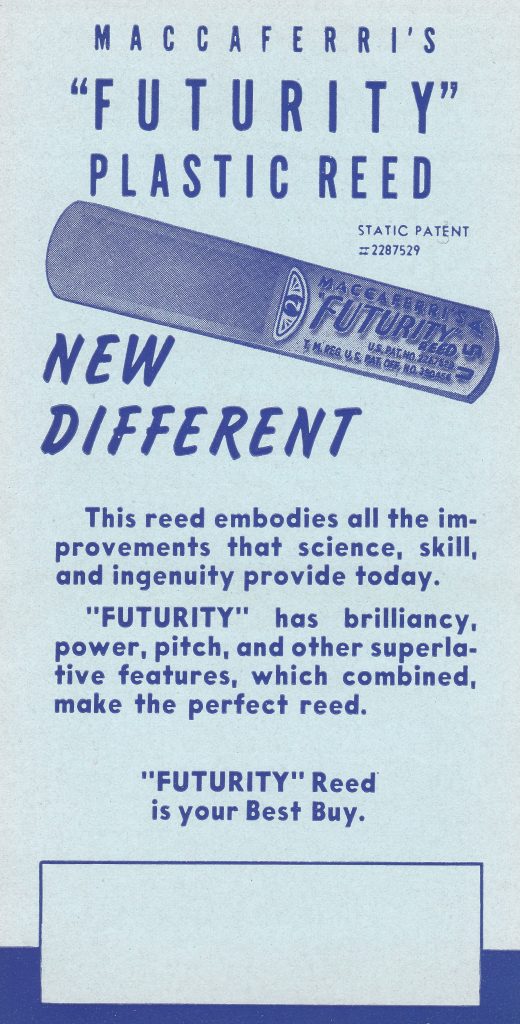 Back of the Insert quote:

When we decided to produce the “FUTURITY”” Reed, two main objectives had to be reached–

First-to embofy into “FUTURITY” all the improvements with which out research, skill, and ingenuity have provided us during our long experience in making reeds, and

Secondly-to be able to sell the new reed at a popular price.

Both of these objectives have been reached 100%, and this in spite of the present difficulties.

It is to your advantage to try it without delay, for we earnestly believe that “FUTURITY” is your best bet and your best buy. 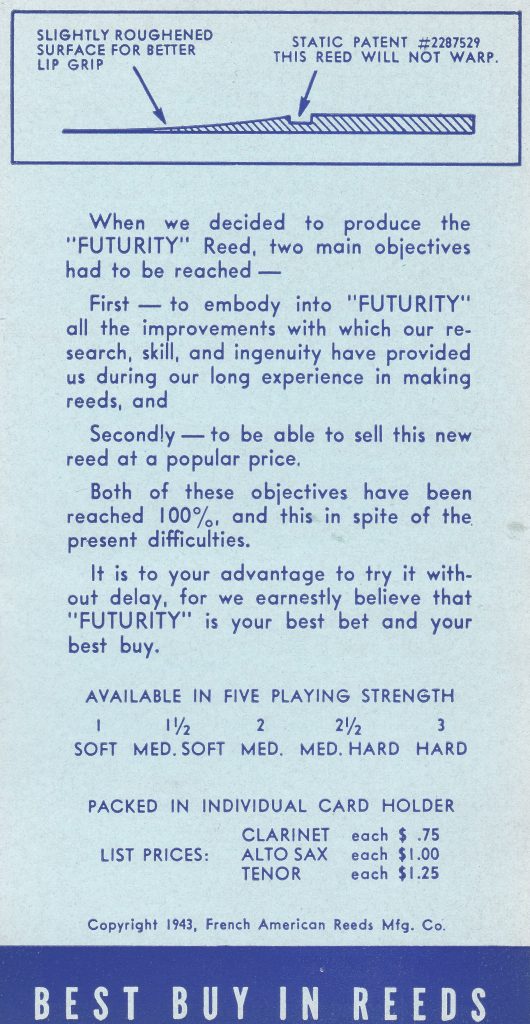 Futurity is the reed that meets ALL requirements for fine performance…quick response, clear tone, easy control, pitch and power, thru full range.  Plays with relaxed embrochure and less fatigue. Futurity is moisture-proof, never gets dry or soggy, and is always ready for instant playing. Lasts for years.